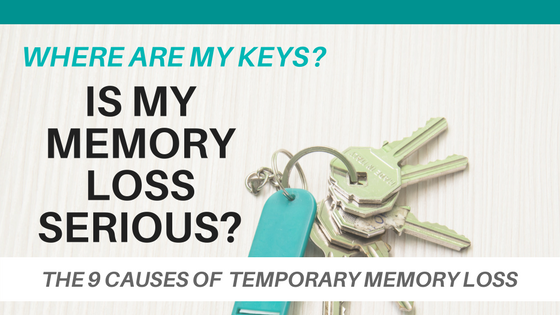 Is My Memory Loss Serious?

Like many of us, at some point you’ve likely ran around the house searching furiously all the drawers looking for your car keys. A few days later, you bump into a friend and for all the tea in China, you can’t remember her name.

You can’t help but think is this normal memory lapse or is this the sign of something more sinister?

For most of us, the experience of memory change may be temporary, and in many cases easy to reverse without too much effort.

So, whether it’s occasional forgetfulness or there is a loss of short term memory, there are a number of factors which can cause this short term, recoverable experience.

It’s worth bearing in mind some forgetting is normal.

Your memory, much like a sailboat can have smooth sailing days or can be buffeted by adverse conditions. The same goes with temporary memory loss, when the conditions change your performance can go back to usual.  However, the more exposure to poor conditions the likelihood of damage may increase.

New learning performance changes over time, as we get older it’s observed that new learning is more difficult. When you combine sensory changes such as hearing and vision changes as we age, then the ability to recall information on a short term basis is challenged due to these changes.

However other areas of memory performance such as historical information is strengthened.

What is encouraging despite these changes, over time, your ability to know more increases, provided you keep at it!

In our memory health and fitness clinic, we apply brain training strategies targeted to improve memory, attention, concentration and processing speed. Combined with our Norris Memory Health Protocol assists people to tackle the known culprits which can affect your memory health.

So whether it is an occasional forgetfulness or there is a loss of short term memory, there are a number of factors which can cause this short term, recoverable experience.

How Often Do These Temporary Memory Loss Symptoms Occur?

The key question here is, are how often do these symptoms occur?

Previously we wrote about the role of the MIND diet and reducing your risk for Alzheimer’s Disease.

Treatment for temporary memory loss will depend on the factors which contribute to it.

Use this list as an audit of where you’re at with factors which may adding to your brain health and memory performance. The problem we see happening far to often is that people are not treating Memory Health changes as a life threatening issue.  If our performance changes it can have very real consequences to our independence, quality of life, ability to work and over all health and well-being.

Temporary memory loss does have an upside, it can help spur you into action.  It’s clear that the best approach to protecting and maintain memory health performance is

to live a life aligned to a brain-healthy lifestyle!

Memory Health Clinic: Next Steps To Reduce Your Risk For Memory Loss

If you’re interested in taking smart actions to improve your brain and memory health and reduce your risk for cognitive decline- call today 1300 783 200 to find out more or schedule your Memory Health Check Up conducted at our memory health clinic.