How To Overcome Brain Fog After Surgery (Science Backed)

The last thing many people, maybe like you, expect is to be hounded by a lingering experience of brain fog after surgery. Mental sluggishness, forgetfulness to being unable to do the everyday thinking tasks which you’d be able to to with ease.

You might be surprised to learn that it’s relatively common, from mild to severe symptoms, it’s more so in people aged over 60 years with about 40% experiencing cognitive changes after surgery. The concern for most folk is, will it be permanent, how long will it last and “what can I do about it”.

The head of the dining table opinion is that “it’s the anaesthetic drugs, right?” Science is revealing a very different view of what is happening and who is at risk.

So, in this article we cover the current scientific view of what causes brain fog after surgery, the risks and what you can do about it (hint: it’s surprisingly straight forward). 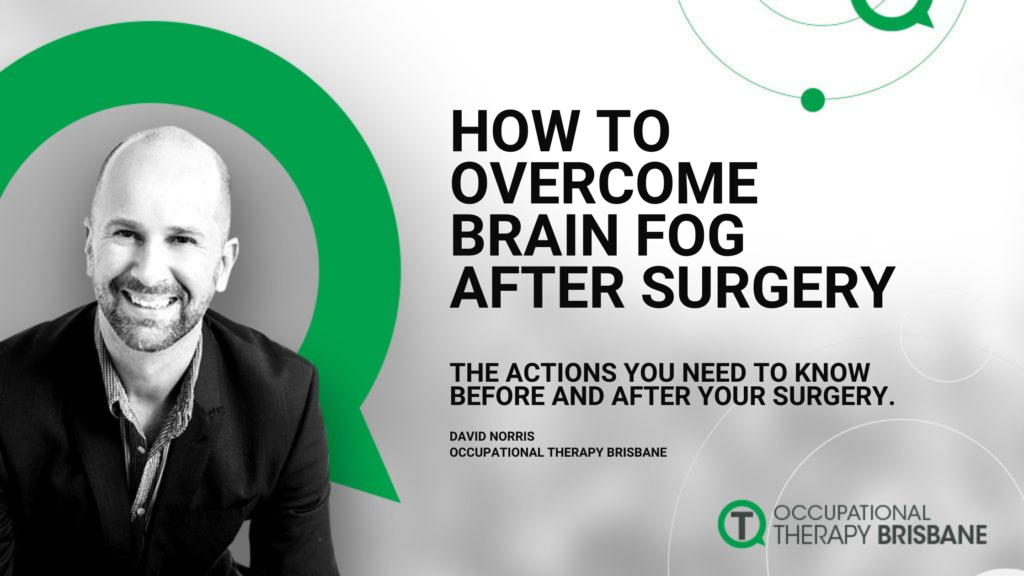 Your after surgery brain function symptoms could be subtle to significant

In previous articles we’ve covered temporary causes of memory loss  which focused on the lifestyle factors that impact our memory, but what is not discussed and often poorly misunderstood is memory problems after surgery.

Whatever the situation you face in this article we’re going to share and answer: 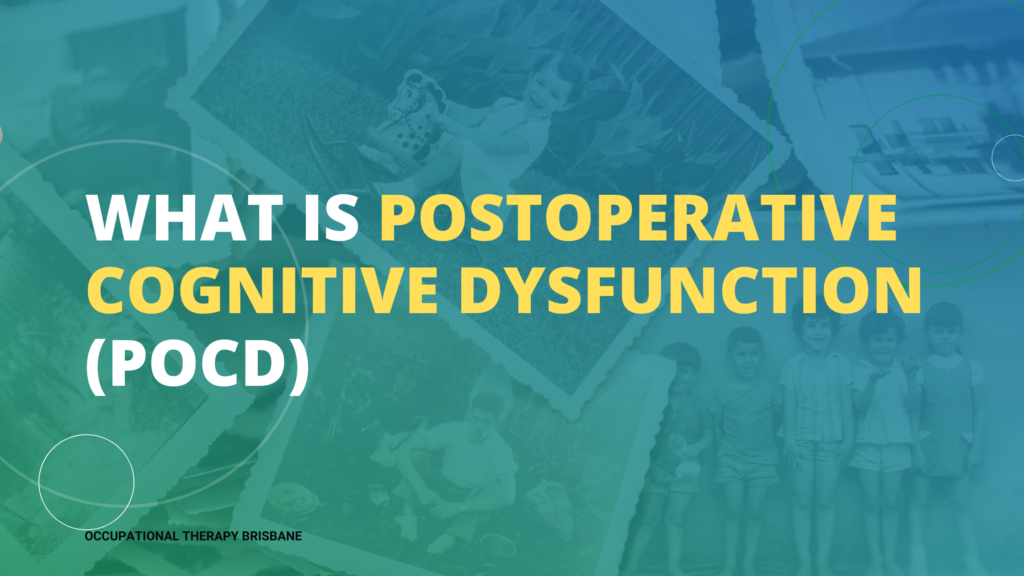 What Is Brain Fog After Surgery? – POCD Explained

As early as 1955, it was described in the Lancet under an article titled “adverse cerebral effects of anaesthesia on old people” but the medical and scientific opinion on this has changed over the years.

Postoperative Cognitive Dysfunction (POCD) is a broad term to describe decline in cognitive function that may last from days to years in patients after surgery.

There’s been inconsistency with defining this thinking change experience over the years, so a multidisciplinary, international group of experts has recommended changing the way clinicians and patients describe cognitive changes after anesthesia and surgery.

PND is then further classified as

The point to all this “definition” stuff, is so that we can better treat, research and help people. Much like treating all Toyota cars as the same. The problems with the latest Hilux won’t be the same as the 1966 Corolla.

PND helps us also appreciate the before, during and after surgery factors that can affect a person’s intellectual abilities.

But all these terms are kind of confusing and leave us still needing some clarity.

For now we’ll stick with the well known POCD for brevity as it is the after surgery life-changing-impact where we are often called to see people.

Is POCD Normal After Surgery? 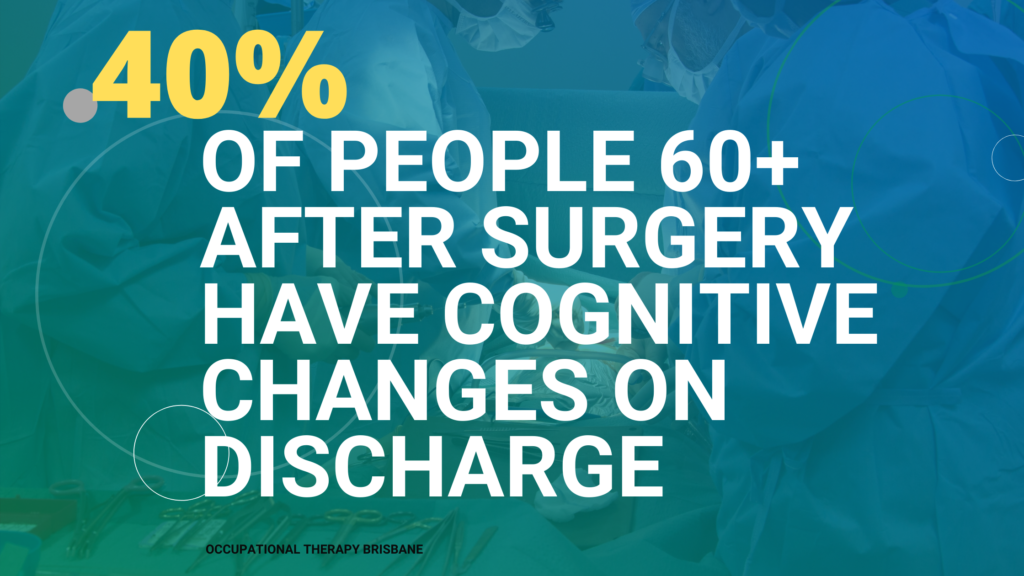 POCD isn’t listed in the DSM-5 nor the International Classification of Diseases (ICD-10) in part due to the lack of good assessment.

From the literature, it is referred to as a prolonged, subtle to significant, and affecting multiple cognitive domains (Strom, 2014). 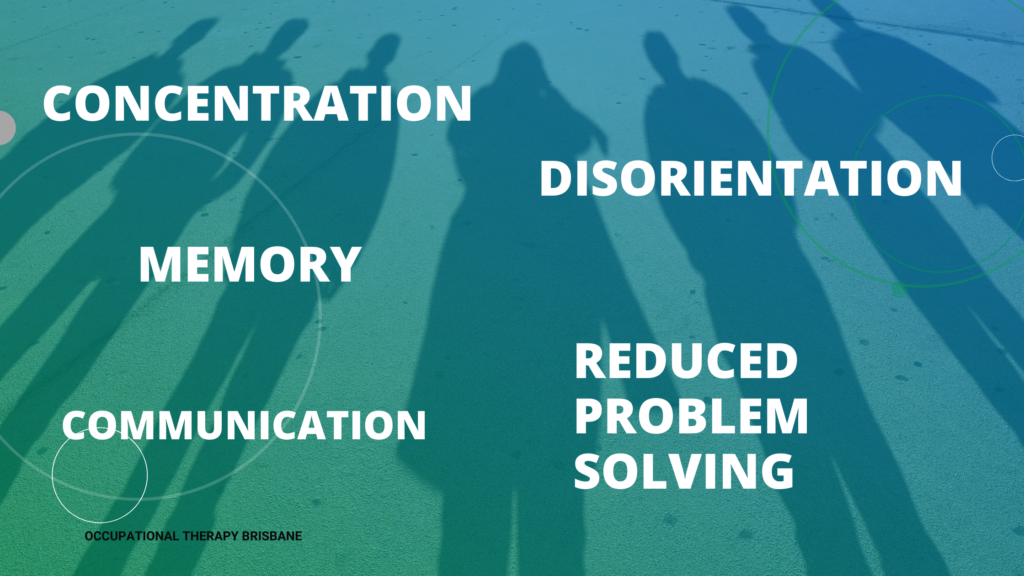 Will My Memory Suffer After Surgery? Who Is At Greater Risk of POCD

Much like in our early article on temporary memory loss, there is the common culprits associated with increasing your risk. This includes things like: 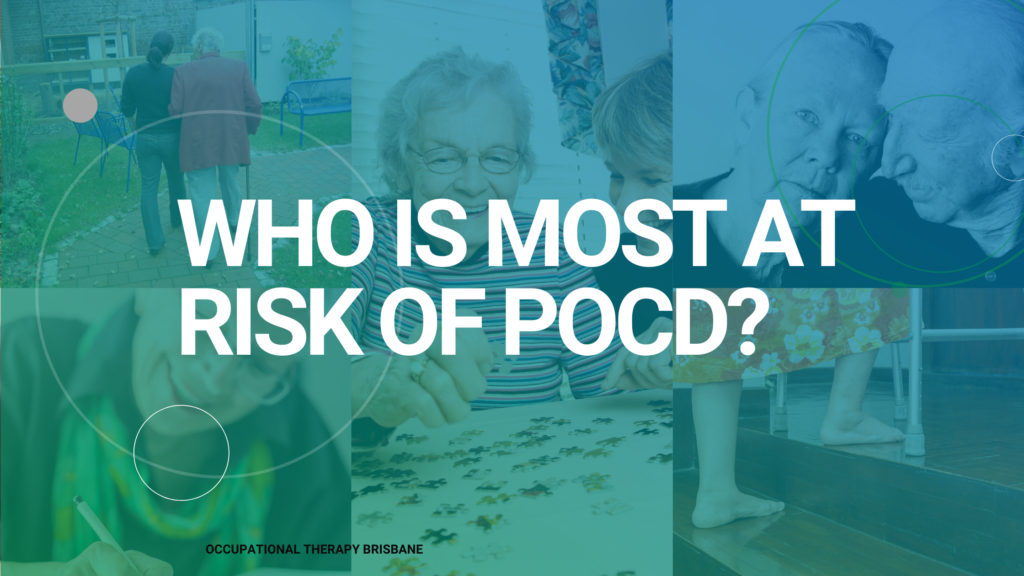 The good news is that there are risks that you can control. At the memory and thinking hub, we’ll map out the things you can change.

What’s The Likelihood of POCD Diagnosis After Surgery

But as you’d appreciate the risk changes depending on type of surgery, and how long you’re under AND your modifiable (fixed) and non-modifiable (changeable) risk factors.

That’s enough to give anyone a headache, right? 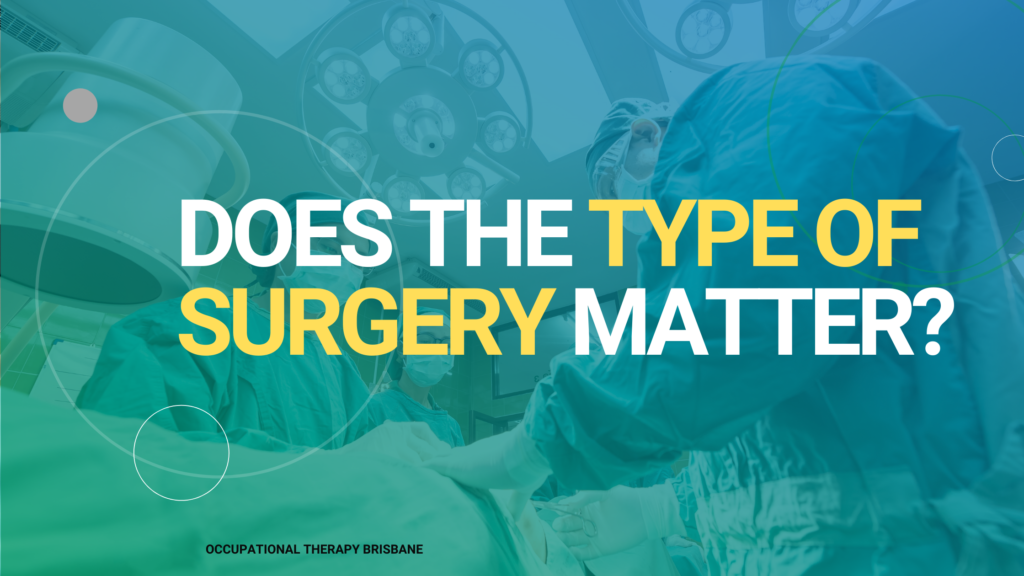 Major and more invasive procedures such as abdominal and vascular surgery carry a greater risk for POCD, compared to minor and  day patient procedures.

People who undergo cardiac and major orthopedic procedures are likely to experience the highest risk for short- or long-term POCD (Wang, et al., 2014).

Is This POCD? What are the symptoms of postoperative cognitive dysfunction and how long can it last for?

The International Society of Postoperative Cognitive Dysfunction considers POCD occurs when changes are noted after surgery in one or more areas of a person’s mental state. 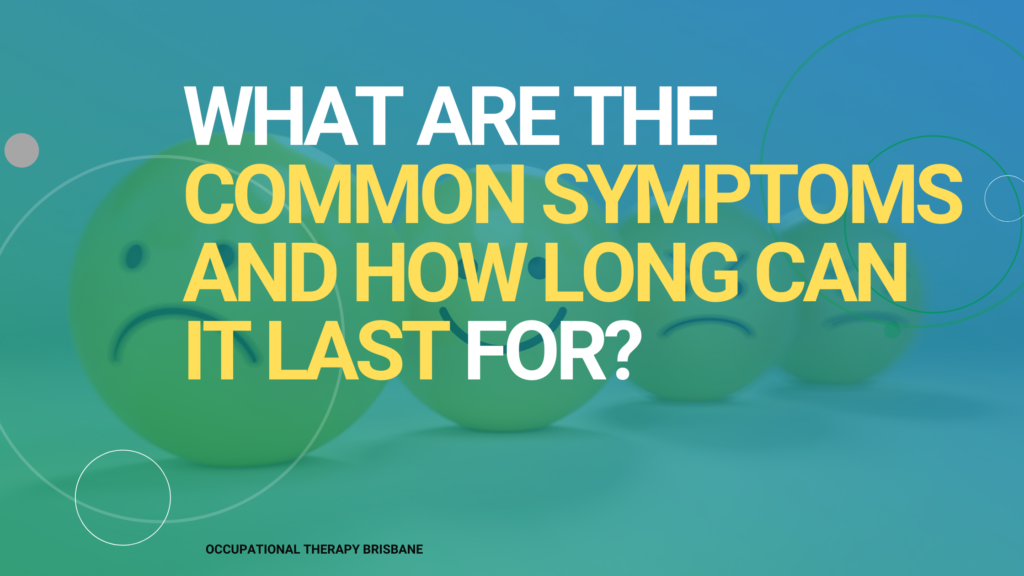 There is a genuine risk for the person living with POCD to losing their jobs, reducing their independence, a reduction in their quality of life and entrenched disability. 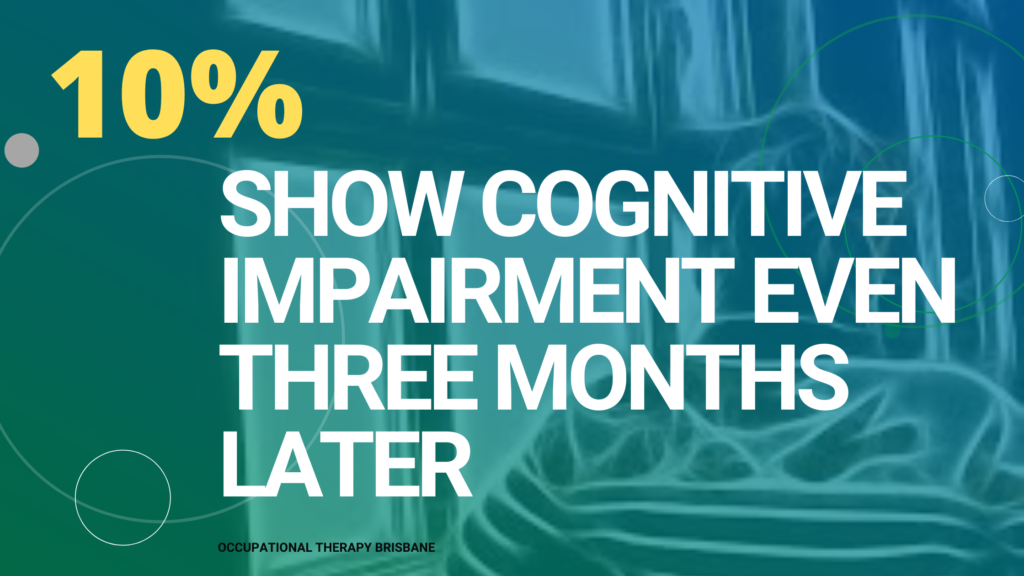 In 2014, there was over 230 million operations occurring with general anaesthetic with most of these operations occurring in people over 60 years of age. The number of new cases is expected to be dramatically more today, and trending more so into the future with an ageing population.

If these rates and figures remain stable, we can anticipate that in a few years millions of elderly patients will be at high risk of developing postoperative cognitive decline (POCD).

Is POCD A Risk Factor For Dementia? 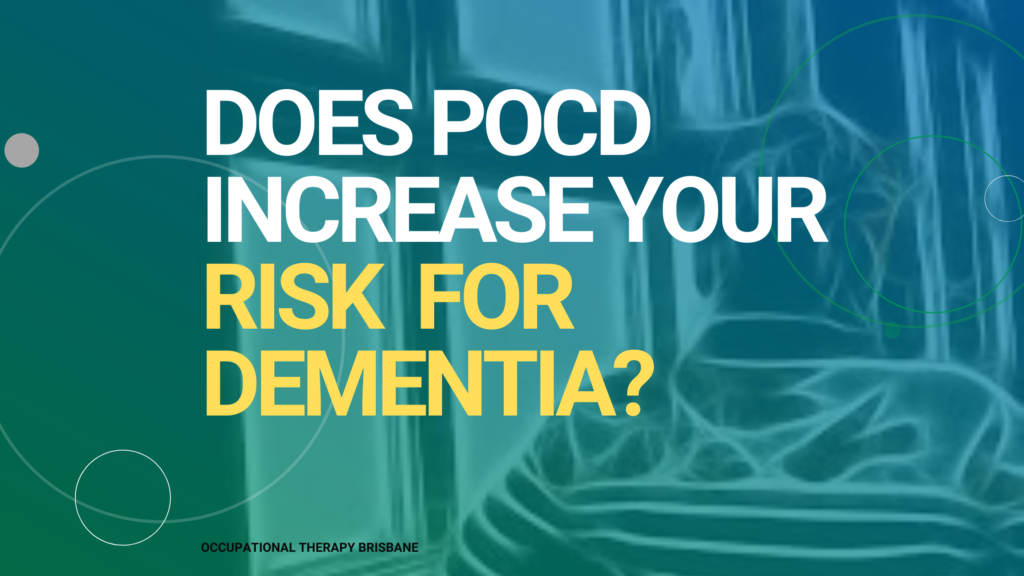 Following for an 11 year period, they reported POCD was not significantly associated with an increased risk for dementia.

The problem with this study’s finding is it stands alone as there isn’t enough research to back up the findings.  The jury is out on this.

What Is the Cause of Postoperative Cognitive Dysfunction?

Anesthetic drugs have been around since the mid 1800s, and today a host of drugs may are used in order to suppress your alertness, arousal, awareness and memory of surgical interventions.

It used to be believed that cognitive decline after surgery was due to anesthesia, but recent studies suggest that heightened inflammation in the brains of patients is the most likely cause.

It’s The Anesthetic Drugs Which Cause Brain Fog After Surgery, Right? 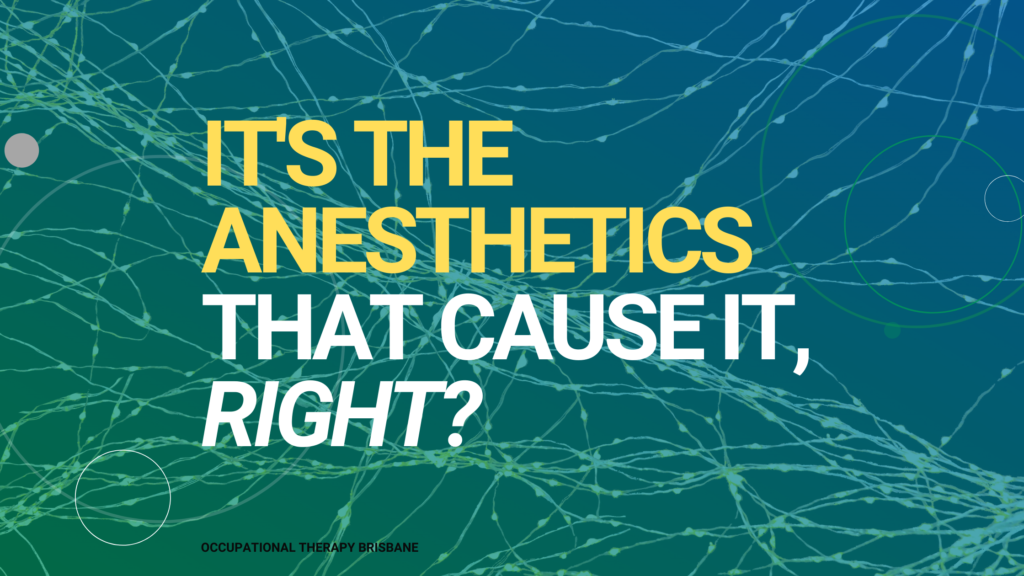 Memory test in mice, yes that does happen. In the above study an oral drug temporarily reduced microglia before surgery,  and those that took the drug were less likely to fail memory tests several days after surgery.

So, there seems to be no causative relationship between general anaesthesia and long-term POCD.

Many Factors Contributing To One Set Of Symptoms

Multimodal Neuroprotective Approach: What Are The Ways To Reduce Your Risk For POCD 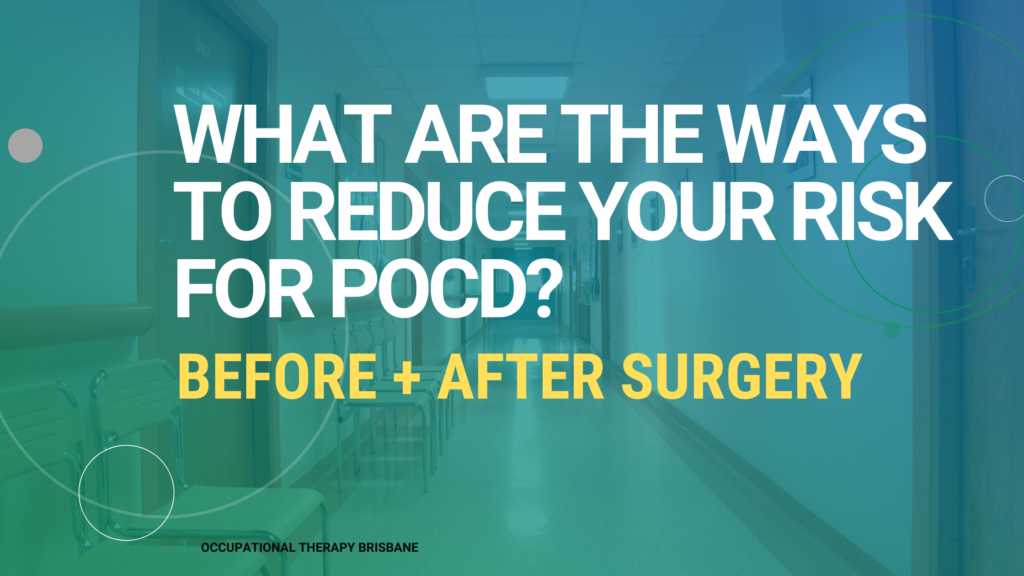 Before Surgery – At Home

Your surgery is months away. Now is the time to get ready for the best recovery. Simply put, aiming to get healthy for surgery is one of the best ways to reduce your risk after surgery. When it comes to your brain health, we’ve got you covered. Here’s a curated list of brain health tips and articles.

Before Surgery – At Hospital

ASA’s Ad Hoc Committee on Perioperative Brain Health Initiative, has an excellent clinical guideline that all health professionals should be aware of, reviewing and considering implementation.  I’ve rarely seen anything near this being applied in orthopaedic or cardiac clinics.

In short it prompts people, especially your health team, to consider:

Quick test, what’s missing here?  You’ve got this far in the article, what do you think? Yep, education background, surgical history. The guide can be found here.

Being the domain of your surgeon and anaesthetist, they will decide on the best course of action in consideration to the above key points. What you can do is ask:

A German team, Deeken and Associates (2021) reported on the effect of Postoperative Delirium Prevention Program in people who underwent orthopedic or abdominal surgery.

The results showed an effect that was significant in reducing the odds and duration of delirium compared to those who had “routine” care.

Not only that, people who participated in the program had less use of pain medication and less need for prolonged stay to use rehabilitation.   These were 4 key pillars of the program

After Surgery At Home

What You Can Do About Lingering Brain Fog Or Memory Loss Months After Surgery? 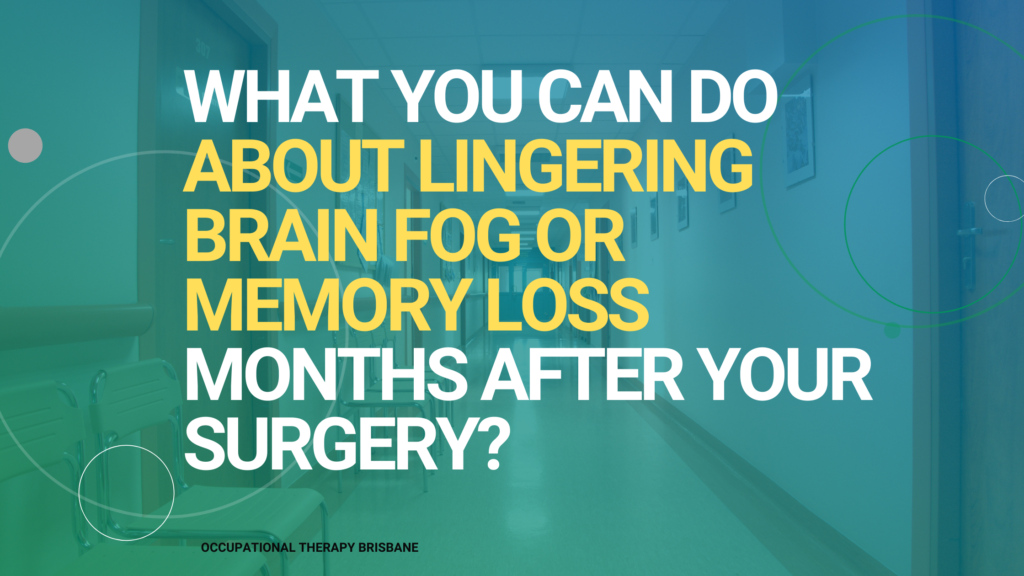 Firstly, if you’re concerned about ongoing memory issues and it’s now a month after surgery, get it assessed by your GP or health professional. It’s important to rule out any ongoing surgery complications.

Secondly, we’ll often have people contact us following a negative result with their health professional where nothing suspicious was found but people and their family are still concerned about their memory and thinking skills after surgery.

You might benefit from a memory health check up which combines lifestyle factors and a comprehensive cognitive assessment to help design a personalised recovery plan to support your goals.

Our mission is to prevent avoidable memory loss and we want to see people living life all out, without the threats to their brain health.

We ‘re committed to Memory Health For Life and want to share with people, maybe like you, how to boost their brain health so you can do what matters most.

If this is of interest, call us today at 1300 783 200 or fill out our contact form here. We’ll aim to be in touch as soon as possible and no later than 24hrs after your enquiry. To get started, CLICK HERE.