This Week In Therapy: “Here’s What It’s Like to Experience Parkinson’s Disease Symptoms”

This Week In Therapy at Occupational Therapy Brisbane, we’re sharing Neurological Therapy And Care advances:  Here’s What It’s Like to Experience Parkinson’s Disease Symptoms, Burden of Stroke In Europe: What Can Australia Learn From This?, Build 2017 Project Emma: “It Makes Me Forget I Have a Tremor, It Helped Me Write Again” and more. 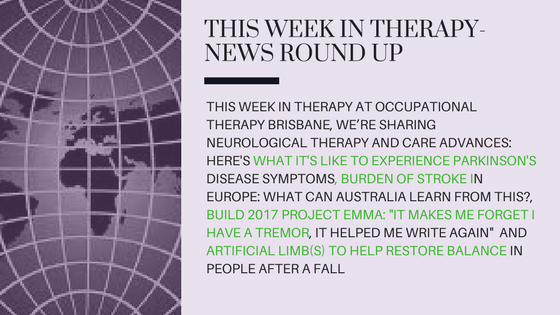 1. Here’s What It’s Like to Experience Parkinson’s Disease Symptoms

Across the world 10 million (plus) people suffer from Parkinson’s Disease and its disabling symptoms. Klick Labs, and Canadian based company,  has developed a technology which, for the first time, offers a glimpse into the lived experience of people suffering from this neuro-degenerative condition.


2. Burden of Stroke In Europe: What Can Australia Learn From This Report? 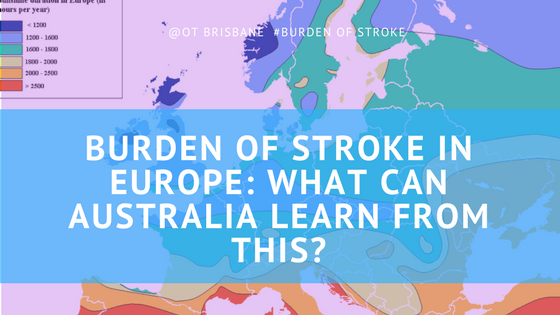 Europe is heading towards a stroke pandemic with the number of stroke survivors likely to rise by 44% over the next 20years, according to the paper released by Stroke Association and the Stroke Alliance for Europe.

“The Burden of Stroke in Europe” reports within the UK alone, by 2035 stroke survivors are expected to increase by 32%  or 1million people.

Recent preventative measures are having an impact on reducing the number of people having a stroke. However, factoring in the proportion of people set to live into their 70s and beyond, overall it’s forecast to rise significantly.

The authors of the report, no doubt stress that prevention needs to be a signification part of the new wave of government and industry response.

Resonating from the paper are lessons for the Australian stroke care and a management landscape:

Source article: The Burden of Stroke in Europe

3. Build 2017 Project Emma: “It Makes Me Forget I Have a Tremor, It Helped Me Write Again”

Emma, relied on her hands to draw, sketch and write. Her experience of Parkinson’s Disease was associated with persistent tremors which affected the quality of her work. Project Emma aims to reduce the experience of the tremor.

What is it : A wrist wearable which can help people who experience Parkinson’s Disease symptoms.

4. Artificial Limb(s) To Help Restore Balance In People After A Fall

At OT Brisbane, we’re often working with clients and carers after a  fall. The impact of the fall commonly has a significant impact on a person’s confidence and independence.  For some clients the recovery path is straight forward, for others it’s a new “balancing act” of preventing another fall.
That’s why the article detailing Dr. Pilwon Hur’s work captured our attention.

Dr. Pilwon Hu is focusing his work to help people with balance issues, be it as a result of  injury, illness or age. Using an approach which combines biomechanics and neuromechanics, Dr. Hur and his team are advancing robotic prosthetics and other therapy devices to help reclaim balance.

You can read more at: https://phys.org/news/2017-05-robotic-prosthetics-fall-victims.html

SUMMING IT ALL UP

Here are the top headlines in This Week In Therapy news:

Artificial Limb(s) To Help Restore Balance In People After A Fall: One of only a few researchers investigating the possibility of creating robotics that not only can walk like a human—which can be done—but that can also help in the event of an unexpected slip or trip based

Build 2017 Project Emma: “It Makes Me Forget I Have a Tremor, It Helped Me Write Again”: Called “Emma,” it is a wrist wearable that can help people suffering with Parkinson’s disease.

Burden of Stroke In Europe: What Can Australia Learn From This?: The Burden of Stroke in Europe’ is a comprehensive analysis of 35 European countries. It was carried out by King’s College London, and is published to mark European Stroke Awareness Day and Make May Purple for Stroke. Researchers are warning that throughout Europe, the number of strokes could rise dramatically by 2035 due to our ageing population.

Here’s What It’s Like to Experience Parkinson’s Disease Symptoms: The Sympulse wearable is worn on the arm and captures the tremors of the wearer. It then transmit them in real time to a second device, worn on the forearm of someone else, who can experience the tremors as if they were their own.