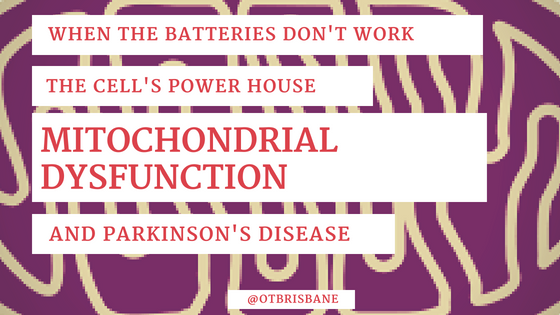 It’s clear there’s great diversity in a person’s Parkinson’s disease symptoms as described elsewhere in this blog.  A person may experience symptoms of diminished ability to control one’s movements, a sense of weakness, tightening of muscles or dystonia,  light-headedness or postural hypo-tension, changes in sense of smell, restlessness as well as cognitive changes such as short term memory loss.

Parkinson’s disease takes a physical, emotional, and psychological toll on patients and their loved ones. But researchers are getting closer to uncovering what exactly may be the root cause of this chronic condition.

They serve as the cells batteries, “the energy factory” powering various functions of the cell and the organism as a whole.

Interesting Fact: Clearly they are a critical part of the cell, it appears that wasn’t always the case as they are believed to have evolved from primitive bacteria.

In each cell, there are special units of “organelles”  with specific functions.   They each have a special role to play in te cell in order for it to operate smoothly. The main function of mitochondria is to metabolize or break down carbohydrates and fatty acids in order to generate energy.

So in a way, the mitochondria in our brain essentially act as a power source for our cells, including the cells that are responsible for producing the chemical dopamine (a neurotransmitter or messenger agent in the body and brain).

Mitochondria are deeply dynamic and complex organelles that constantly divide and fuse with each other, move along the cell, suffer regulated turnover and play diverse important cellular functions. It has been observed that abnormalities in this balance can lead to neuron dysfunction and cell death. (Villace et al, 2017).

Neurons are especially energy-dependent cells and in the case of dopaminergic neurons, this dependence is even higher. Neurons are extremely sensitive to mitochondrial injury which can have drastic consequences for neuron health and survival.

Damaged mitochondria can negatively influence neurons – including those that produce dopamine – in many ways.

These symptoms in the end can cause the dopamine-producing neurons to malfunction or die.

For those with Parkinson’s disease, the cells responsible for creating dopamine start to die in an area of the brain known as the substantia nigra. When these levels drop, individuals may present with the cardinal signs of Parkinson’s disease.

How You May Support Your Mitochondria

Our mitochondria fuel our bodies at their most basic level. Properly taking care of these little powerhouses means not only keeping the disease at bay but improving our entire health.

Not a lot is known about mitochondria and how to repair them when damaged. But research over the past decade has shown some promising links between certain nutrients in our diet and improving mitochondria function, including:

Other foods rich in antioxidants include green tea (because of their high levels of catechins), pecans (rich in vitamin E), and carrots (loaded with beta-carotene).

Not a fan of beef or fish? Start snacking on peanuts and sesame seeds. Certain fruits and vegetables like oranges, broccoli, cauliflower, and strawberries also contain high levels of this nutrient.

Research into dietary repair of damaged mitochondria is  very much in it’s early years. As yet there is little known how supplements and diets studied in the lab, especially in mice,  will affect drug interactions and disease processes. Much more is needed to be known. It is likely the best course of action may be to follow a healthy nutritional program such as the Mediterranean diet or the MIND diet. We have an extensive blog on the MIND diet and you can find it HERE.

Learn More About Your Treatment Options with Occupational Therapy Brisbane

The Occupational Therapy Brisbane team take a holistic approach when providing tailored treatment plans to our Parkinson’s disease clients. As well as striving to provide patients with the most independent and safe lifestyle possible, we work with our clients to help uncover  issues which may be having an impact on their treatment outcomes. Our goal is to help you achieve maximum functional independence and to sustain this for as long as possible.

For more information on our services and how we can help you or your loved one, we welcome you to take a few minutes to fill out the contact form, or call 1300 783 200 to schedule a time to speak with a Brisbane occupational therapists.