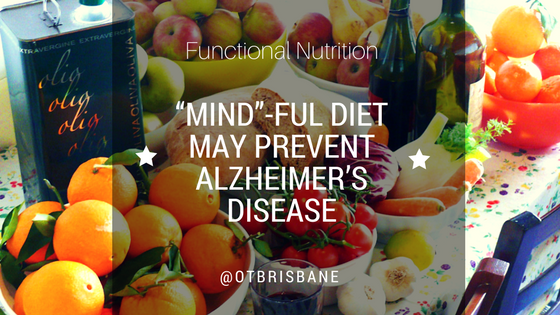 The “MIND” diet for Alzheimer’s prevention offers new insight into the disease management.

Did you know that the foods you eat may have an impact on your chances of developing Alzheimer’s disease?

“Let food be thy medicine and medicine be thy food.” ― Hippocrates

Evidence found in a study published in the journal “Alzheimer’s & Dementia: The Journal of the Alzheimer’s Association” showed that individuals who consume what is known as the MIND diet (Mediterranean-DASH Intervention for Neurodegenerative Delay) could substantially reduce their risk of having Alzheimer’s Disease in the future – and you do not even need to strictly follow the diet to reap its benefits.

In this one particular study from Rush University published in 2015, it was found that participants who rigorously adhered to the MIND diet had a 53 percent lessened risk of Alzheimer’s disease. Those who followed it “moderately well” reduced their risk by 35 percent.

Another study  involving over 7,000 women for a period of 10 years measured the effectiveness of the MIND diet. Participants who closely followed the diet guidelines were 34 percent less likely to develop the disease than women who did not.… .. Click here to read the rest