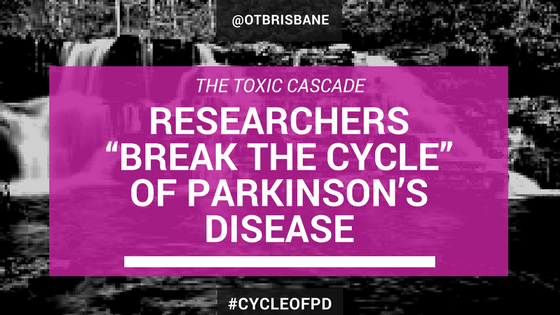 It’s clear Parkinson’s Disease is a complex interaction of many factors which neuroscience is starting to unravel but there appears each day, each month a new insight into the disease and also potential intervention.

You might ask yourself why an OT blog is writing about diet.

For us it’s simple.

We can’t perform at our best, to do the things that matter in life, unless all the moving pieces which can affect your performance are optimized.

Diet has an important role in ensuring you have the right and diverse amount of nutrients available so that you body and brain can work at its very best.

That was the question scientists at Northwestern Medicine have been investigating. They’ve discovered what they refer to as a “toxic cascade” which causes neural degeneration in patients suffering from Parkinson’s disease – and they’ve reported  how to stop it.

The research, authored by Dr Dimitri Krainc and Lena Burbulla and published in the journal ‘Science’ last month, was initiated approximately six years ago in a lab at Harvard Medical School and Massachusetts General Hospital and was completed in the last four years at Northwestern University Feinberg School of Medicine.

The team is the first to identify a cyclical effect which causes neuron degeneration in Parkinson’s disease patients.

Understanding How And Why Neurons Die In Parkinson’s Disease

Parkinson’s is the second leading neurodegenerative disorder affecting people today. Throughout the course of the disease, dopamine-containing neurons die in a region of the brain responsible for motor control (the substantia nigra). We all naturally lose dopamine neurons as we age, but Parkinson’s patients lose a greater number of these neurons at a rate too fast for remaining cells to compensate for the loss.

Krainc and his team discovered how and why cellular mechanisms behind the death of these cells in the lysosomes and mitochondria occurred, as well as how their pathways converged. The researchers state that it is due to a “toxic cascade” which starts with the accumulation of the protein alpha-synuclein and oxidised dopamine. This weakens the brain’s lysosomal function and contributes to the degeneration of neurons.

Krainc and his team’s research found that specific antioxidant intervention in the early stages of the disease improves mitochondrial oxidant stress and reduces oxidised dopamine levels. This can stop the continuation of the degenerative cycle of Parkinson’s disease and improve a patient’s neural function.

The Challenges And Practical Applications Of The Research

According to Krainic the time to respond with there intervention is early in the disease process. The problem is people are likely asymptomatic and therefore hard to identify as to who would benefit.

One of the challenges of treating Parkinson’s disease is to identify it early enough to slow its damaging effects. Below are three early warning signs that you or a loved one may have the disease:

Occupational Therapy Brisbane is committed to making the lives of those suffering from Parkinson’s disease better. Our skilled Brisbane occupational therapists assess the homes, workplaces, and communities of those living with Parkinson’s disease and make the adjustments necessary so that you or a loved one can safely enjoy an independent and fulfilling life. Furthermore, we offer Parkinson’s Disease Management Plan consultations and in home functional exercises programs.

Visit us online to fill out an inquiry form or call us today to arrange for a consultation with a Brisbane occupational therapist at 1300 783 200.