Posted by David
· No Comments 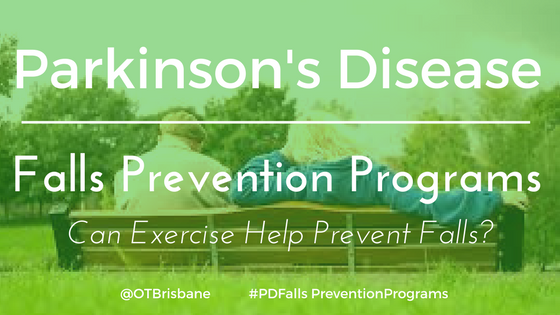 I received another call from “John’s” wife, again. It was the call of solidarity that John had had another fall. Despite his Parkinson’s Disease exercises, his falls experience was too numerous to count. Parkinson’s Disease falls prevention programs were a priority for John and his wife and no doubt many other people living with PD. So what works?

Over time there had been minor and major consequences of  John’s falls. It was clear, each fall

You see, John came late to us.

Late that is in the his PD symptom experience. He’d had far too many falls along the way. They were big flags along his history which cried out for a fall prevention response, much earlier. You see, the common clinical assumption is that falls only occur on the mid to end stages of the PD.

Not so according to new research out of Norway.

This challenged the research team out of Norway who investigated Parkinson’s Disease exercises and how it can prevent falls. They expected to find that falls occur later stages of the disease process, instead it appears to occur much earlier.

No doubt there is a lot in day to day living which challenges your balance, coordination and strength. For people who experience Parkinson’s Disease, maybe like you, the day to day tasks can feel like a battle with a titan. With any given moment a threat being upended onto the floor.

Whether it is getting out of bed, managing the groceries out of the car, walking with the dog, dodging obstacles, getting off public transport, up and down the stairs, you’d agree there is a lot going on.

Parkinson’ Disease symptoms can affect a freezing of movement, a slowness to respond or difficulties to coordinate the body to the unexpected and this can lead to a fall.

Parkinson’s Disease and The Symptoms

Ylva Hivand Hiorth physiotherapist and researcher of University of Stavanger reports the key finding of their study as:

In summary of the article

At Occupational Therapy Brisbane the services will go beyond just exercises to achieve a holistic Parkinson’s Disease falls prevention programs. What you can expect is an analysis and action plan to address the falls risks for you. This maybe factors in your

So call us today today to discuss your situation and lets see if we can help reduce our falls risks. Call 1300 783 200 to arrange a 10min phone consultation.

The Occupational Therapy Blog is a news and health promotion initiative. It by no means aims to be a source of medical or therapeutic advice. We enjoy sharing information and will attempt to curate it as best we can. You’d appreciate we like to lighten our blog articles which often tackles very serious and personal issues. It’s our way of sharing. The information contained on this blog is not intended to be a substitute for professional advice, or intervention. Always seek the advice of your GP or qualified therapist with any questions you may have regarding your personal situation. Never substitute or delay seeking professional advice because of information you’ve read on this website.