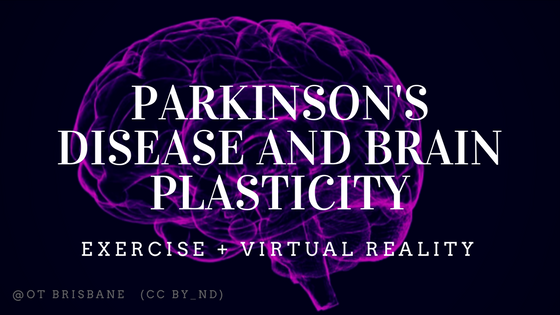 Tel Aviv University researchers report the dual reality therapy was effective for people at later stages of the disease.

About The Parkinson’s Disease and Brain Plasticity Study:

The objective of the research was to compare the effects of 2 forms of exercise. This included a 6-week trial of treadmill training with virtual reality (TT + VR) that targets motor and cognitive aspects of safe ambulation. The other form of exercise was a 6-week trial of treadmill training alone (TT). The exercises effects were observed on brain activation in patients with Parkinson disease (PD).

The Results and Study Conclusions

Previously the team who conducted this research also observed that people experiencing PD use cognitive functions of the pre-frontal cortex of the brain to offset the changes in motor skills.  In a way compensating, or working around, the impaired motor function.

“We also showed that a specific form of exercise targeting the cognitive control of gait — combined treadmill training with a Virtual Reality representation of obstacles in a path — leads to a significantly lower fall rate in Parkinson’s patients. The Virtual Reality gait program, in which patients must avoid obstacles, enhances the patient’s cognitive performance and thus reduces the requirement for prefrontal brain activity,”

The results from the study suggests that a therapy which combines Virtual Reality and treadmill exercise significantly lowers the incidence of falling among Parkinson’s patients by changing the brain’s behavior and promoting beneficial brain plasticity, even in patients with neuro-degenerative disease.

The research underlines the importance of combining cognitive rehabilitation with the motor rehabilitation of Parkinson’s disease patients. Whilst not a large sample size the findings are encouraging, especially so, for people at later stages of the disease.


If you’re interested in how you can adapt the brain for PD we’ve compiled this:

Occupational Therapy Brisbane is committed to making the lives of those suffering from Parkinson’s disease better. Our skilled Brisbane occupational therapists assess the homes, workplaces, and communities of those living with Parkinson’s disease and make the adjustments necessary so that you or a loved one can safely enjoy an independent and fulfilling life. Furthermore, we offer Parkinson’s Disease Management Plan consultations either face to face or online as well as in home functional exercise programs.

Visit us online to fill out an inquiry form or call us today to arrange for a consultation with a Brisbane occupational therapist at 1300 783 200.

Disparate effects of training on brain activation in Parkinson disease