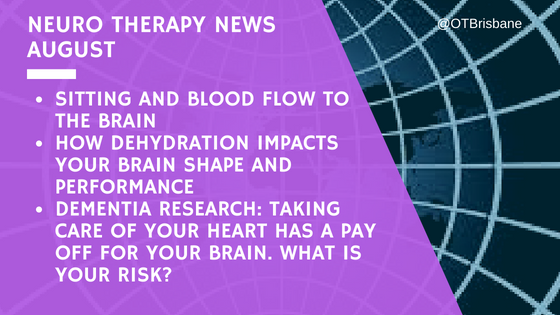 Does Sitting For Long Hours Reduce Blood Flow To The Brain?

If you’ve been on a visit to your GP you’ve likely seen the poster ” What Is Australia’s Biggest Killer?” Under the headline is pictures of a Great White Shark, Crocodiles, Dogs, Cars etc. All with big RED crosses through them. Nope, the biggest killer is sitting, lack of movement.

So it was with interest we read the research from the Liverpool John Moores University in the U.K. who found evidence of reduced blood flow to the brain in people who sit for long periods of time.

We were interested in the cognitive and functional observations of this work especially as decreased cerebrovascular blood flow and function are associated with lower cognitive functioning and increased risk of neurodegenerative diseases.

Here is a summary of their findings

How Dehydration Impacts Your Brain Shape And Performance

Dementia Research: Taking Care Of Your Heart Has A Pay Off For Your Brain

A french study, published in the Journal of the American Medical Association, of 6,600 senior citizens suggests taking care of your cardiovascular system will benefit your brain as well.

The study tackled: Is there an association between cardiovascular health level in older age and risk of incident dementia?

Here is what the study observed

It’s never too late to state taking care of your cardiovascular health, the case all the more compelling as it may just be a great way to prevent cognitive decline.

Looking For Neurological assessment and rehabilitation services? Here’s more information which may be of help here.