How You Can Overcome Parkinson’s Freezing Gait (Complete Guide)

If you’ve been living with Parkinson’s Disease for some time it’s likely you’ve experienced Freezing of Gait episodes.

You see, 1 in 2 people living with PD are predicted to experience some form of Freezing of Gait and is a major Parkinson’s disease symptom.

If you’re struggling moving through doorways, changes in floor surfaces or the floor just feels so sticky, then this article is for you. 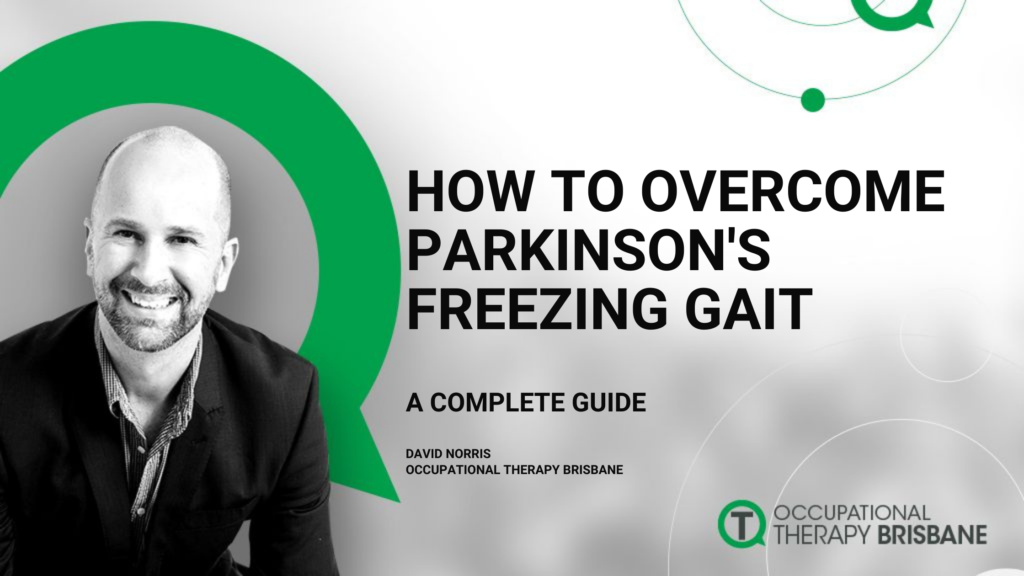 After offering Parkinson’s Disease occupational therapy services since our doors opened, we’ve seen the big impact of freezing in our patients lives.

Not every client has asked us “What can I do stop Parkinson’s freezing gait?”

But those people who do, for them, it’s a big concern.

Freezing can be a massive life barrier and a major safety threat and we’d like to help you overcome this today.

In this complete guide you’ll learn: 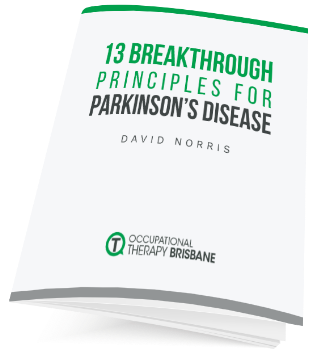 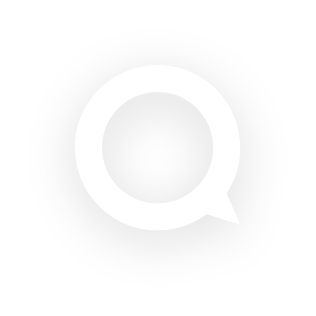 WHAT ARE PARKINSON’S FREEZING GAIT SYMPTOMS? 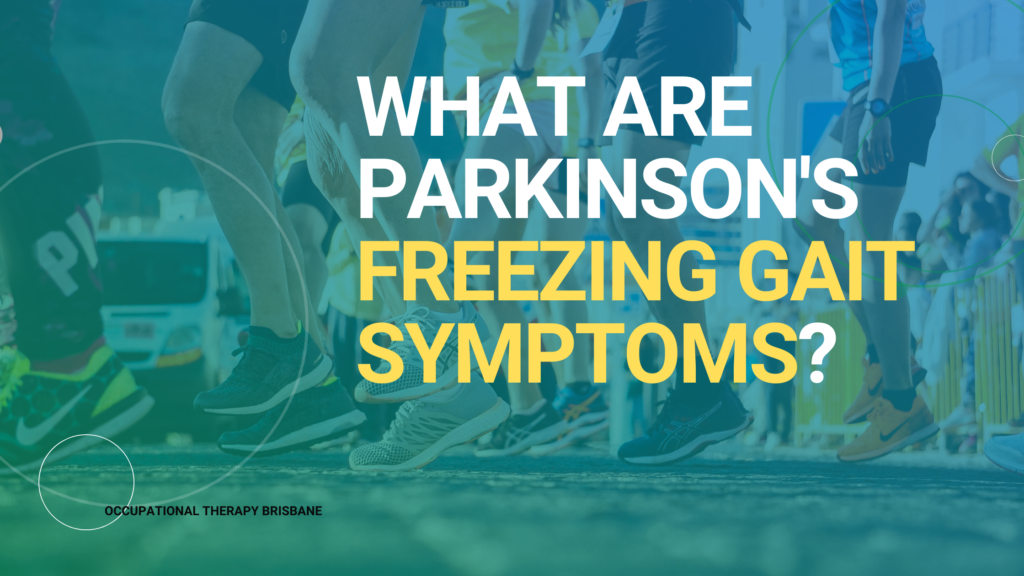 Some people describe their Parkinson’s Disease freezing symptoms as 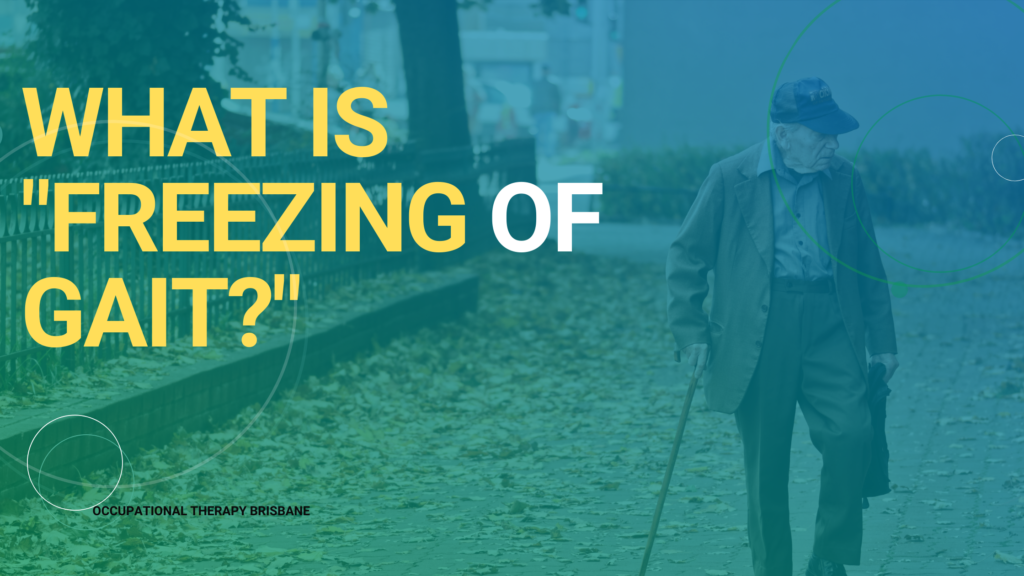 If you’re scratching your head about what freezing of gait means, you’re not alone. In fact most health professionals need to “google it”.

When it comes to walking, some people living with PD experience this sense of being stuck, or “my feet are stuck to the floor” which describes the disrupted  gait in patients living with PD.

Whatever your experience of FoG is, there are some common features of this gait pattern. 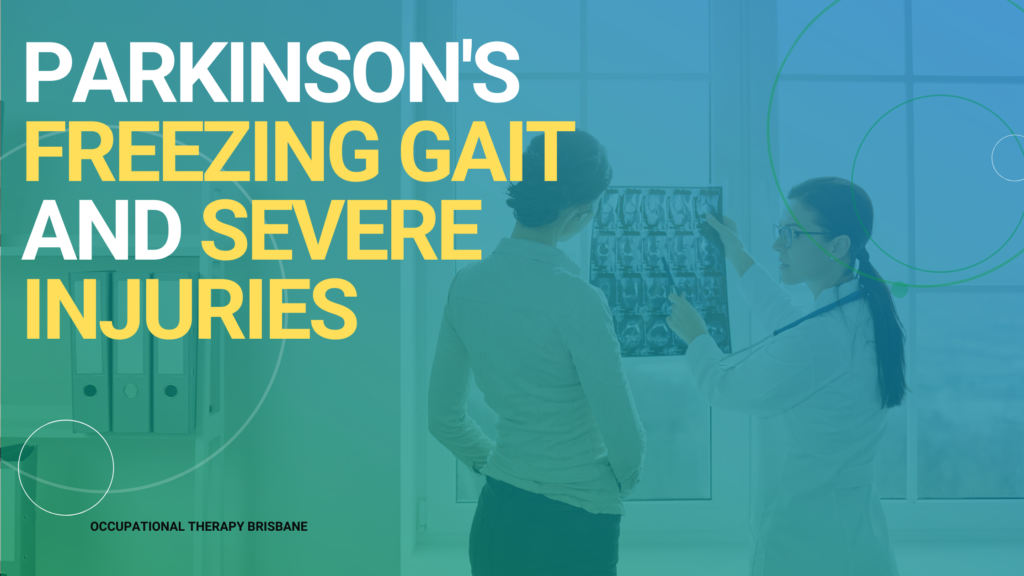 About 38 percent of people living with PD fall each year. PD-related falls occur mostly when turning or changing directions and are often related to a freezing episode.

People who are living with Parkinson’s and experience Freezing of Gait will often report near misses, crash landing in chairs or minor falls.

It’s vital to be attentive to these events as a “fall” can be a significant safety and life threatening issue. A fall can result in a serious injury.

Please don’t dismiss the impact a fall can have.

A fall can have catastrophic consequences on a person’s independence, health and lifespan.

“Freezing of gait is one of the most debilitating symptoms of Parkinson’s disease and is an important contributor to falls, leading to it being a major cause of hospitalization and nursing home admissions.”  (Sweeney et al, 2019)

“FOG in PD patients is the main cause of falling, fracture risk, and activities of daily living disability” (Okuma et al,  2018)

COMMON TRIGGERS OR CAUSES OF FREEZING OF GAIT 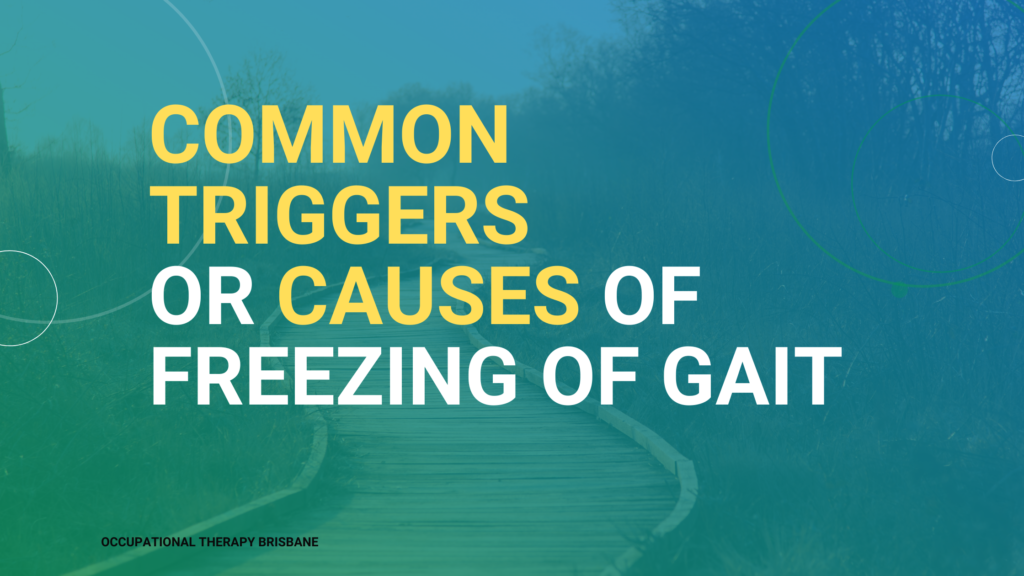 People who experience freezing may describe situations where they find themselves stuck, for example:

You can appreciate that in the spacious clinic, with uniform floor surfaces it is often hard to detect freezing of gait.

It happens in everyday life away from the clinic.

That’s why we offer in tele-therapy, in home and community consultations.

It allows us to assess the impact of PD in your life and to design personalised plans with the goal to help you live a more independent life.

WHY DOES FREEZING HAPPEN IN PARKINSON’S DISEASE? 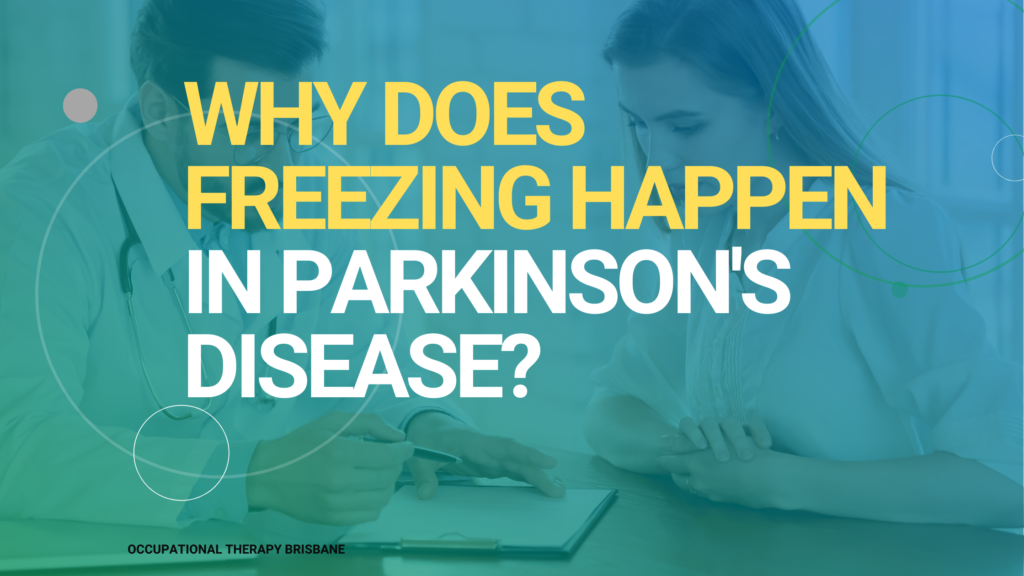 It’s clear, anything to do with the brain is far from simple.

When it comes to the brain networks which controls your gait, yep you guessed it, it’s complex.

Your walking pattern relies on multiple connections and pathways between various parts of the brain.

Freezing of gait can be viewed like a good detective novel.

Movement is a dynamic activity. It adapts and responds to the world around us. As a result, there are a number of brain regions or “characters” implicated as being involved with Freezing of Gait in Parkinson’s Disease.

These brain areas are widely distributed and act in a synchronised and consistent manner.

You could say movement involves dynamic brain network coordination, and it’s this circuitry, this network behaviour, which appears to be affected and in the end gives rise to Parkinson’s freezing of gait (Lozano and Lipsman, 2013). 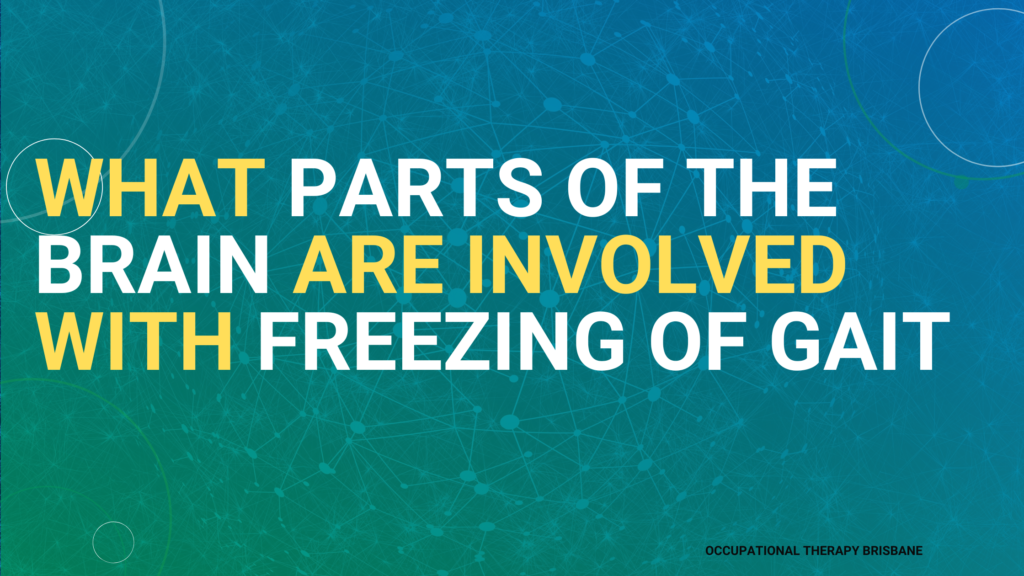 So, What Circuits Aren’t Working?

So, Let’s Simplify This Complex of Freezing of Gait Brain Scenario

Yes, it’s a complex scenario involving a breakdown in brain circuitry and processing.

Therefore, the response to this situation requires a multi-pronged and personalised response.

PREDICTORS OF FREEZING: WHEN ARE PEOPLE LIVING WITH PARKINSON’S MOST LIKELY TO FREEZE? 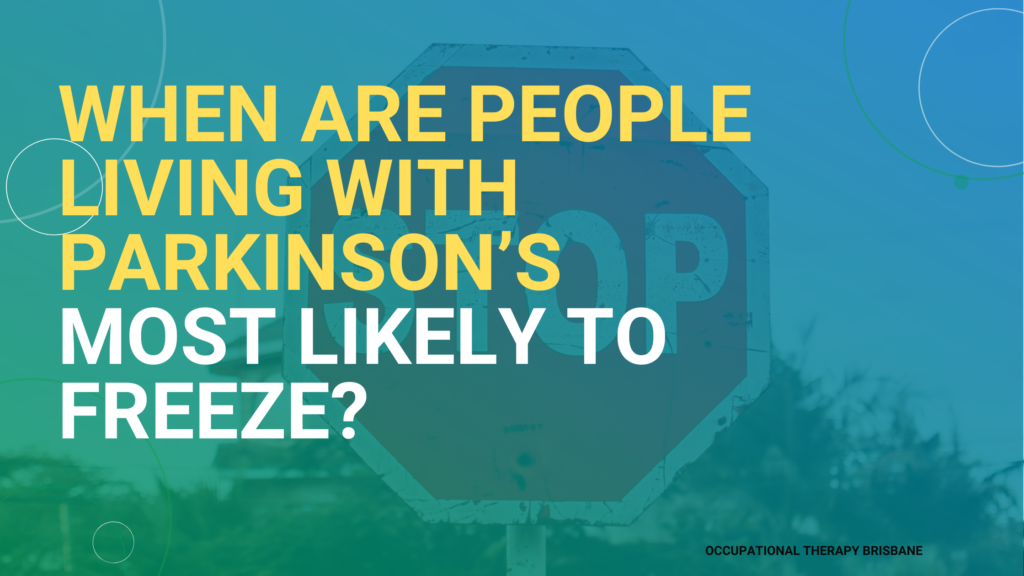 Freezing is common among Parkinson’s patients, and is most often seen in those with long-standing symptoms.

The results underline the necessity to develop appropriate countermeasures against this phenomenon, which is widely known to cause significant impairment of patients’ quality of life and – as our data also showed – may cause traffic accidents in licensed patients.

A previous study in 2001 has also established

Not everyone can complete neuro-imaging and if anything you can take away here, is being attentive to balance and your walking patterns, especially reducing in step length.

WILL MEDICATION HELP WITH FREEZING OF GAIT EPISODES? 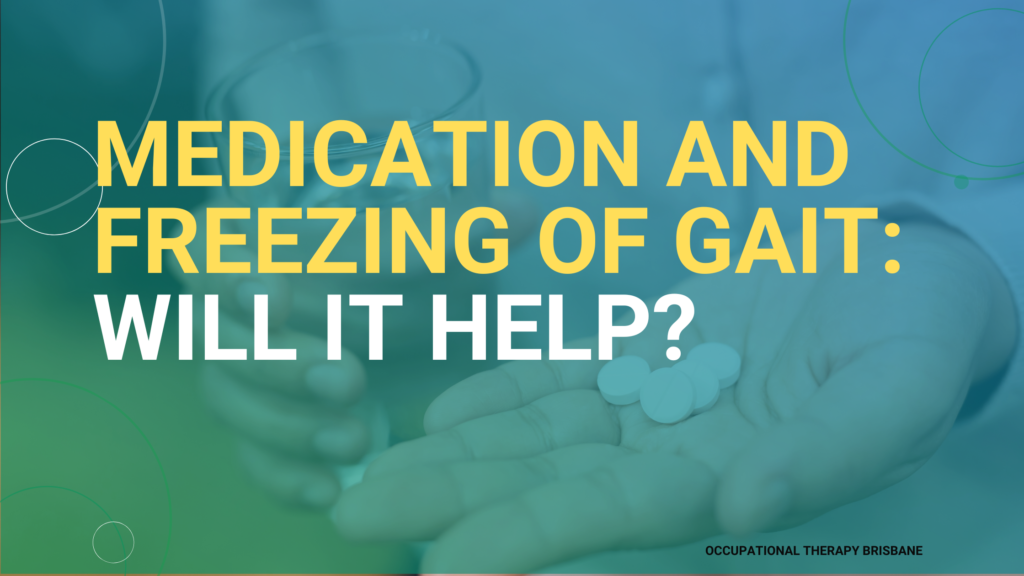 Overall, the key findings of the study showed that

In short, there is a trend to observe freezing of gait n later stages of the disease state, however those who experience FOG in both On and Off medication states are likely the result, according the researchers, to be under medicated  (Amboni et al, 2015)

TIP: If you’re experience Freezing in both medication ON and OFF states be sure to speak with your doctor regarding your current medication regime.

OH NO, I’M FREEZING! WHAT THE HECK SHOULD I DO NOW? 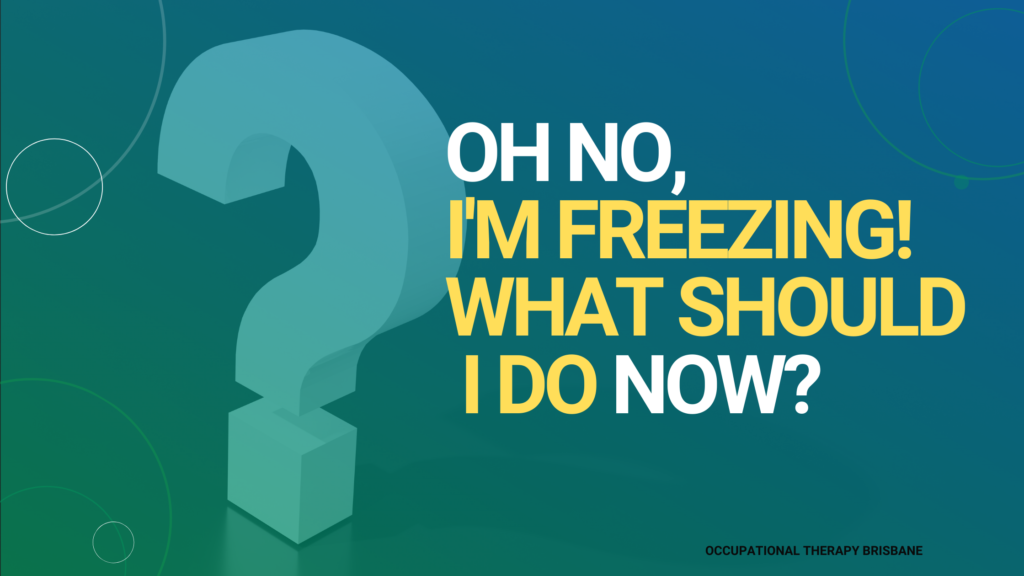 There are a number of factors that can contribute to freezing of your gait.

First up we need to map out what they are.

FIRSTLY,TAKE THIS FREEZING OF GAIT QUESTIONNAIRE:

IDENTIFY WHAT ARE YOUR TRIGGERS

Am I Freezing? Is This Freezing?

Most questionnaires, or clinical assessments of people living with PD which checks for freezing will commonly observe a person performing a number of walking actions.

So, to do this ask yourself how is your movement performance in the following areas, do you have had problems with:

Take a moment and consider your experiences here against this list.

Do you have any symptoms?

Do these symptoms they all the time, sometimes, occasionally or not at all?

Connecting with a physiotherapist or occupational therapist maybe of help, and our suggestion is to do this early rather than later as the risk of having a fall increases when living with PD and Freezing.

Here’s a list of common factors that may add up to freezing episode happening more often.

HERE’S WHAT IS POSSIBLY AMPLIFYING YOUR FREEZING EPISODE

Inconsistency or Lack of Exercise Program

WHAT SHOULD YOUR FREEZING OF GAIT TREATMENT STRATEGY LOOK LIKE?

Keeping in mind your triggers a personalised approach may include one or more of the following. 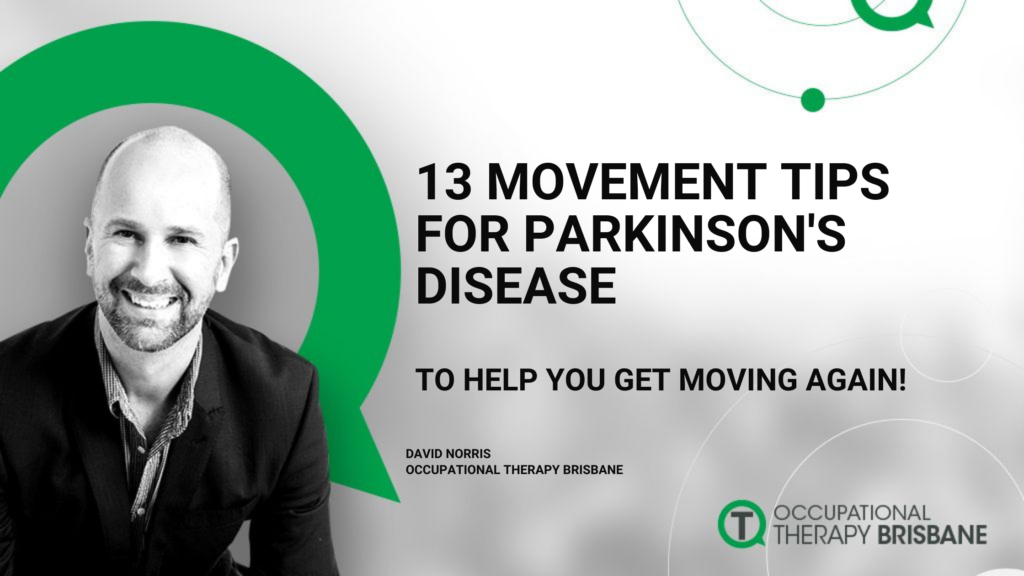 Slowness of movements (Bradykinesia) is one of the cardinal symptoms of Parkinson’s disease. The sequence effect is a  feature observed with Bradykinesia in which there is  decline in amplitude and speed of repeated movements (e.g. walking and wand writing).

So, as a person commences movement there is relative scale and as  person continues with the movement it gets smaller and smaller. It is a major cause of disability in Parkinson’s disease.

Medication has had mixed results with this feature of PD though external prompts have shown to be beneficial (Tinaz, et al., 2016).

Like a bank account, movement appears to have an energetic cost and as a person progress in a movement, there is less and less available.

Dopamine supporting medication allows the trigger for movement but appears to not maintain the vigor and size of movement according to research.

Aim to make over exaggerated  movements, such as Big steps and Big arm swings. It’s a way to retrain the muscles and slow down the progression of hypokinesia, the increasingly smaller, more shuffling movements that happen with Parkinson’s.

2. Develop the mindful skills to walk with purpose and with intent.

Using therapy programs to practice these skills there are emerging positive results using interventions like:

The findings of a large meta-analysis suggest that it’s a combination of approaches which are needed as “in clinic” exercises have a short term carry over. Meaning more sustained activities as well as in home work is needed as well. (Cosentino et al, 2019)

Rather than trying to “bust through” the freezing, consider moving an alternative part of your body to “circuit break” the frozen movement. This may include:

5. Verbal Cue and Prime yourself to GO!

7. STOP! Take The Pressure Off

8. Establish a home or work environment which is “Freezing Resistant Sanctuary”

10. Place An Object In Front Of You

13. PLUS: Mitigate the threats to achieving and sustaining a healthy lifestyle.

ASSISTIVE TECHNOLOGY (AIDS) TO HELP WITH FREEZING OF GAIT

There are many walkers on the market, basically a simple metal frame which may be supported by stoppers, slides or wheels.

THERAPIST WHO CAN HELP WITH FREEZING OF GAIT 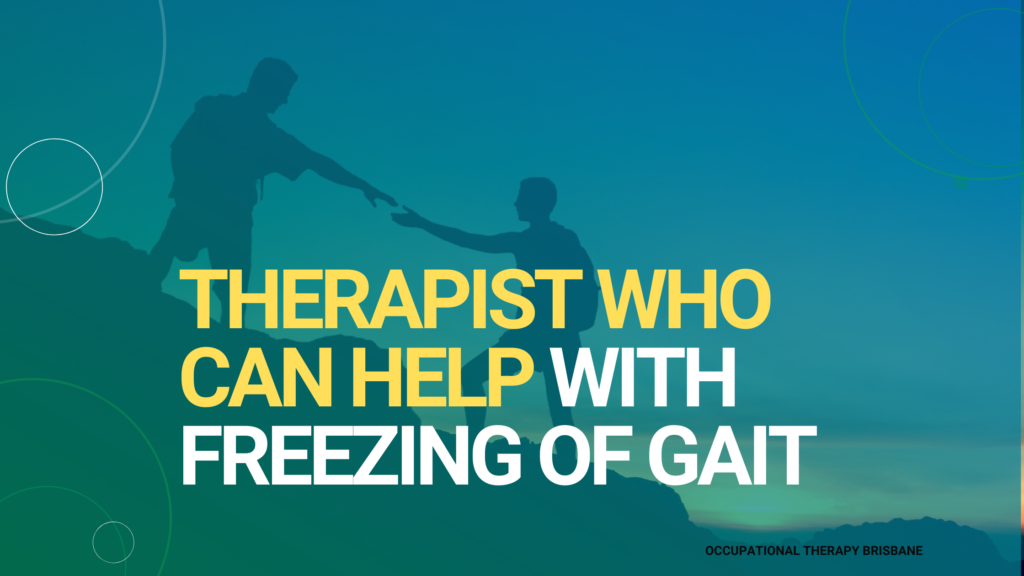 A physical therapist or commonly known as physiotherapist who’s skilled in working with people living with movement or gait disorders will be a great member of your team!

As mentioned a lot triggers for Freezing of Gait episodes happen outside the clinic.

Having an occupational therapist come to your home, community or workplace offers you a clinical perspective with a deeply pragmatic focus.

The role of occupational therapy and Parkinson’s disease is to help people live better with their PD symptoms.

You can expect from an occupational therapist services which focus on

If there’s a key takeaway to close this article on Freezing of Gait and what to do about it’s this:

Freezing in Parkinson’s is a highly complex brain circuitry pathology which requires (often) a multi-pronged and personalised approach.

If you’d like to explore strategies for your personal situation please do not hesitate to contact us at Occupational Therapy Brisbane today.

WHAT THERAPY DO YOU NEED? 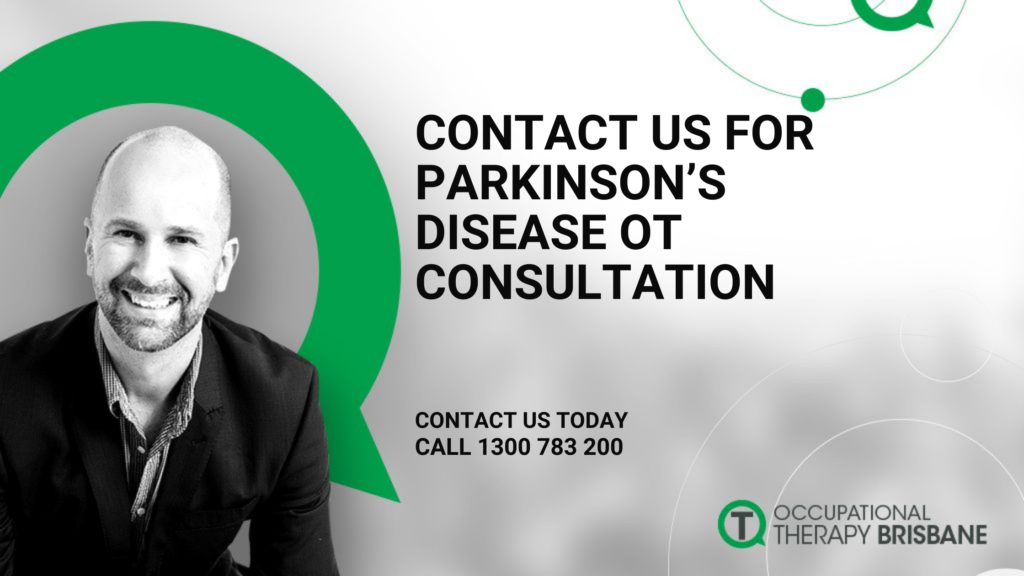 Choose from in home, community or tele-therapy consultations.

The Occupational Therapy Blog is a news and health promotion initiative.  It by no means aims to be a source of medical or therapeutic advice. We enjoy sharing information and will attempt to curate it as best we can.  You’d appreciate we like to lighten our blog articles which often tackles very serious issues. It’s our way of sharing.   The information contained on this blog is not intended to be a substitute for professional advice, or intervention.  Always seek the advice of your GP or qualified therapist with any questions you may have regarding your personal situation. Never substitute or delay seeking professional advice because of information you’ve read on this website.