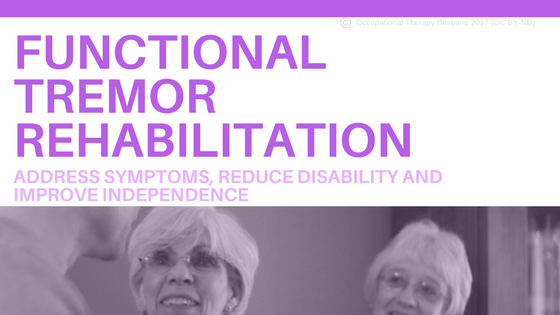 Functional tremor rehabilitation targets the symptoms, the disability experience and the psychogenic causes of the tremor. It’s clear for some people functional or psychogenic tremor can be a source of marked disability and can impact on their daily life profoundly.

From the ability to perform everyday task like cooking to getting dressed may be dramatically affected by a persistent and variable tremor. So what does rehabilitation offer someone who is experiencing a functional tremor? This article explains what you can expect from Occupational Therapy Brisbane.

The diagnosis is likely a very tiring and prolonged journey.  Commonly a process of exclusion and investigation by your neurologist.

The journey itself to diagnosis can be a trying time and some people may experience and exacerbation of their symptoms during this period.

Conversely, being supported, heard and receive a thorough examination may also lighten the symptom load.

It’s important to note that functional tremor is not a degenerative condition like Parkinson’s Disease but one of central nervous system dysfunction. Simply put, it’s not working as well as it should and in fact it has adapted to a new mode of working which may fluctuate in tremor scale and intensity.

Having confidence with your diagnosis is a part of the recovery process and it can be a journey for people to achieve this. Not buying into the diagnosis with your treatment team can impact on your rehabilitative efforts.

So, what is a functional tremor?

The term functional (psychogenic) movement disorders (FMD) has historically been applied to disorders that manifest with physical symptoms—specifically abnormal movements (gait disorders, tremor, dystonia, etc.)—but which cannot be attributed to any of known underlying organic disorder and which instead is presumed to be due to “psychological factors”. However, we prefer to define this disorder by its clinical appearance, rather than by any causative speculation, as a movement disorder that is significantly altered by distraction or non-physiological manoeuvres (including dramatic placebo response) and that is clinically incongruent with movement disorders known to be caused by neurologic diseases.

The common symptoms of functional tremor

Commonly a body part like the arm leg or body has an uncontrollable tremor. The key here is that it is not associated with an underlying neurological condition. Instead it is the result of the central nervous system working incorrectly.

The  functional tremor may be persistent or or it can come and go throughout the day. The tremors may be subtle or more violent and rapid as well as change in speed and size.

The important thing to bear in mind is that it is the brain isn’t working as well as it should, that it is real and not “all in your mind”.

Commonly people will mistaken the experience of a functional tremor with Parkinsonian tremor.

Whilst Parkinson’s disease is a neurodegenerative condition Functional tremor is potential reversible, however there are positive conditions which appear to be associated with increased quality of life outcome.

What are the causes of functional tremor

Whilst not a conclusive list functional tremor may appear following

You’re likely to have a team of people to assist with your recovery.

An Occupational Therapist will

Other allied health professions you may also include in your rehabilitation team include:

We focus on helping you achieve your goals. We know this can be hard as some people get frustrated with the “goal” language. What we’re aiming to do is to help you achieve outcomes relevant to your life. Make a start is what we suggest and then build from there.

It all starts by scheduling a 15min Free phone consultation.  If we can help, we’ll schedule a time for an initial assessment where we’ll see you at your home or in our offices. We have rooms at Banyo, Scarborough and Herston. Call us today on 1300 783 200 or fill out the form below and our team will get in touch with you as soon as possible.