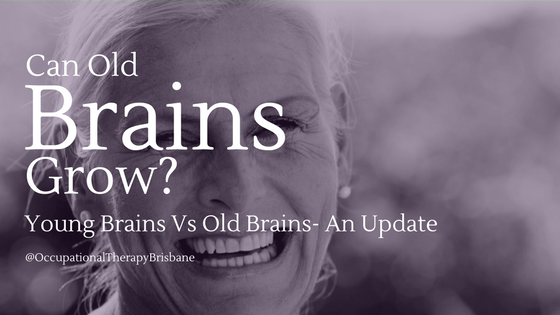 I know – I can’t believe it either.

Too fast, too big – oh my how they change.

I seem to be rolling out every parent’s observation.

What’s interesting about this and the reason I mention this is that since his birth to the time in which he is an adult his brain will double in size.

In his early 20s his brain will weigh about 1.4kg and there will be about 100 billion neurons and over a trillion connections.

But is that it for my future adult son?

Is that it for you as an older adult?

The long standing belief was that the process of aging in the brain is largely a story of deterioration and decline. Key to this theory is that new neurons are not developed beyond mid teens. ( Neurons being the working cell/unit of the brain)

A number of studies have supported this position by finding no evidence of neuron growth in the pre-frontal cortex and other areas, however, it is now emerging despite the strong headwinds of traditional beliefs, there are several areas in the brain that grow new neurons.

In the Brain and Memory Health workshops I  talk about brain change- not necessarily about brain growth. The big question which hasn’t been resolved is whether we can grow new neurons in life after the early years.

How Healthy Is Your Hippocampus?

Remember this guy? ( sounds like hippopotamus and is a super important brain area essential for your memory and emotions).

A team from Columbia University reported in the journal Cell Stem Cell  the brain does make new cells throughout your life. However, the cells made by older brains may not form as many connections, and this appears to be associated to vascular ( blood supply) support.

The group of people,  whose brains were examined after they died, where confirmed to have healthy memory and no signs of cognitive decline and diagnosis  for conditions like dementia .

The older patients had thousands of immature neurons ( baby neurons) which was similar to their younger counterparts.

There was less blood supply in older the brain which appeared to affect the number of connections. So age-related declines may instead not be the numbers of cells, but how well they are working because there is less blood vessel development.

What is the one way you can support blood supply?

You’d recall from our blogs what is needed.

Exercise, Diet, Medication, Supplements (maybe), Stop Smoking, Stress Management, Sleep, Healthy Social Relationships may all play a role in your brain and memory health. The key is to come up with a personal plan which attends to your risks- your needs.  Exercise and diet are especially related to blood supply and vascularisation ( ability to deliver blood).

Doing these activities makes sense. You’ve got the cells waiting there for the right conditions to grow and connect to their potential- why not give them a hand?

It’s a no brainer ( pardon the pun- it is Monday)

FREE Memory Health Report: 5 Actions to Reduce Your Risk For Dementia is now available. You can get it here.

I am also very excited to announce the opening of our Memory Health Clinic because no Australian over 50 should suffer from avoidable memory loss. Here’s more information about the clinic here

The following presentations are in the works – are you able to come?  In many cases they are free.